In brief In detail

Proactive and transparent corporate governance promotes sustainable business behavior and long-term value creation. In 2016, Novozymes’ Board of Directors focused on getting the company in better shape to meet current challenges and leverage future opportunities.

In September 2016, Bayer AG announced its intention to acquire Monsanto Co. to create an agribusiness covering seeds, traits, crop protection and biologicals. The transaction is subject to customary closing conditions, including the receipt of required regulatory approvals. Closing is expected by the end of 2017. The Board acknowledges that The BioAg Alliance is exposed to risks, as described in the Risk management section. Although it is still too early to determine how the acquisition may potentially impact The BioAg Alliance, the Board believes that this could be very positive.

Novozymes also entered into new ventures in microbials and acquired Organobalance GmbH, a German company that researches and develops microbial solutions. A number of board members were involved in the acquisition process at different levels.

Reshaping the company for future growth

At the beginning of the year, big decisions had to be made to reprioritize the company’s efforts. The Board fully supported the decision to restructure the Executive Leadership Team and reorganize the company. The result was three new commercial divisions: Household Care & Technical, Agriculture & BioenergyBioenergy comes in the form of liquid fuels, electricity, heat and steam, and is produced from primary crops or biomass such as sugarcane, grains, agricultural residues, algae and household waste. In liquid forms, it is typically used to replace gasoline and diesel in transportation. and Food & Beverages – each responsible for sales, marketing and technical services as well as application development and a strong focus on customers.

With the restructuring, we welcomed two new members to the Executive Leadership Team: Tina Sejersgård Fanø and Anders Lund. The Board was especially pleased to see this demonstration of well-functioning succession planning, as the two have grown their careers within Novozymes and have a strong track record and extensive knowledge about the company.

As in previous years, the Board conducted reviews of Novozymes’ business and the mid- and long-term strategies for its main business areas. We held a number of deep-dive sessions on specific industry strategies, to identify exactly how we can help Novozymes achieve its targets. We also looked at Novozymes’ competitive advantages and how we can help fortify and utilize what sets the company apart from its competitors. The Board discussed current challenges in the Bioenergy industry that continued to impact Group sales over the year. Another area of focus was the processed oils industry. The Board was presented with the opportunities this industry offers Novozymes and was a sounding board to determine the strategy going forward.

New Nomination and Remuneration Committee
We closely monitor corporate governance trends, guidelines and regulations, and regularly update our management systems to ensure openness and transparency. In 2016, the Board reviewed its committee structure and decided to set up a new Nomination and Remuneration Committee in 2017 consisting of three board members.

During the year, the Board approved further stages of the project to establish a new innovation campus in Lyngby, Denmark, to secure the long-term future of the business. The ground-breaking ceremony took place on November 8. Ready for use in 2019, this will be a great place for Novozymes and Zymers to work on more biological solutions and invite stakeholders into the inspiring world of biotechnology!

Chairman of the Board of Directors

Board of Directors: Composition and responsibilities

Novozymes’ Articles of Association require the Board of Directors to have four to eight members elected at the Annual Shareholders’ Meeting. Currently, the Board has six members.

They are elected for one year at a time and cannot be elected or re-elected after reaching the age of 70.

Nominations are based on an evaluation of factors such as competencies, diversity, independence and prior performance.

In order to ensure the right competencies and promote diversity, the following targets have been set for the composition of the Board of Directors:

"The Board of Directors has decided to establish a Nomination and Remuneration Committee in 2017."

The Board of Directors has decided to establish a Nomination and Remuneration Committee in 2017 to take over the matters relating to remuneration and nominations, which up to now have been carried out by the Chairmanship.

As part of the internal control system, all cases of identified fraud and all concerns raised are investigated and reported to the Audit Committee and the Board of Directors. 44 investigation cases were reported in 2016 of which 25 were substantiated fraud. Sanctions included dismissal of employees, reporting to the police and other disciplinary measures. Further information on fraud can be found in Note 8.3 to the Consolidated financial statements.

In laying down the management principles for Novozymes, the Board of Directors has followed the Recommendations on Corporate Governance that form part of the disclosure requirements applicable to companies listed on Nasdaq Copenhagen. These recommendations are available at corporategovernance.dk. A detailed review of Novozymes’ position on all of the recommendations and a description of the internal control and risk management system relating to financial reporting can be found in the statutory report on corporate governance pursuant to section 107b of the Danish Financial Statements Act, at report2016.novozymes.com/governance/governancereport.

Furthermore, under the Danish Financial Statements Act (sections 99a and 99b) it is mandatory for large companies to report on corporate responsibility and equal opportunities. As a member of the UN Global Compact, Novozymes prepares a Communication on Progress, which is available under Sustainability indices & data at report2016.novozymes.com/sustainability/ungc-cop. Together with the integrated financial, environmental and social reporting, the Communication on Progress meets both the requirements for reporting on corporate responsibility and equal opportunities, and the UN Global Compact’s advanced reporting criteria.

Novozymes also works within the parameters of Touch the World, a document outlining the company’s values and commitments, and has committed to principles derived from the UN Global Compact and the UN Convention on Biological Diversity.

The Board of Directors held seven meetings in 2016, with an overall attendance rate of 100%.

"The Board of Directors held seven meetings in 2016, with an overall attendance rate of 100%."
The Annual Shareholders’ Meeting has authorized the Board of Directors to allow the company to acquire treasury stock on an ongoing basis, provided the nominal value of the company’s total holding of treasury stock does not exceed 10% of its share capital at any time, cf. section 198 of the Danish Companies Act.

of the opinion that the share structure with A and B common stock is the best way to safeguard Novozymes’ long-term strategy and development to the benefit of the company’s shareholders and other stakeholders.

Novozymes is party to a number of partnership contracts that can be terminated by the other party in the event of significant changes to the ownership or control of Novozymes. A few contracts contain provisions that restrict Novozymes' licenses to use specific forms of technology in such situations.

Chairman of the Board of Directors

Changes to the Board of Directors

After 17 years as Chairman of Novozymes’ Board of Directors, Mr. Henrik Gürtler has decided to not seek re-election to the Board at the Annual Shareholders' Meeting on February 22, 2017. The Board proposes the election of Mr. Jørgen Buhl Rasmussen as Chairman of the Board. Mr. Rasmussen has been a member of the Board since 2011 and Vice Chairman for the past year. The Board proposes Mr. Rasmussen as the new Chairman because of his in-depth knowledge of Novozymes, significant experience of leading global companies, and particular insight into businesses in emerging markets and consumer industries, most recently as the CEO of Carlsberg A/S.

In addition to the changes to the Chairmanship, the Board is proposing the election of two new members, Ms. Kim Stratton and Mr. Kasim Kutay.

Ms. Stratton is a member of the executive management of Shire, a global biotech company, where she is responsible for all commercial activities outside the US. The Board is proposing to elect Ms. Stratton because of her extensive international experience in technology companies that have created high growth with impressive earnings based on long-term investments in innovation. She has notable leadership experience from various commercial entities and has led organizations in both Switzerland, the US and the UK. The Board expects Ms. Stratton’s experience and global commercial perspective will strengthen Novozymes’ strategic agenda. Ms. Stratton is 54 years old and an Australian citizen.

Mr. Kutay is the CEO of Novo A/S, the main shareholder in Novozymes. Mr. Kutay has more than 25 years’ experience within the life science industry and banking, and brings notable international experience. The Board expects Mr. Kutay to strengthen the Board’s strategic and financial understanding when entering into partnerships and acquiring and divesting businesses. Mr. Kutay is 51 years old and a British citizen. 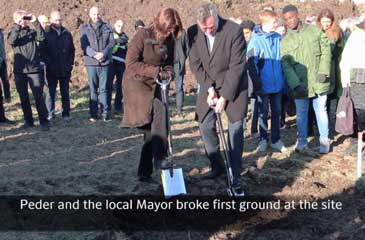 Novozymes’ overall tax strategy and transfer-pricing policy support a positive tax contribution to society and governments in the countries in which Novozymes operates. Novozymes continuously works to fulfill its tax obligations in the countries where it operates. We seek to obtain a competitive tax level in a fair and responsible way, and with full regard to national and international laws and regulations. Besides taxes, our economic contributions include duties, VAT, employee taxes, employee pension and benefit programs, procurement from local vendors and job creation.